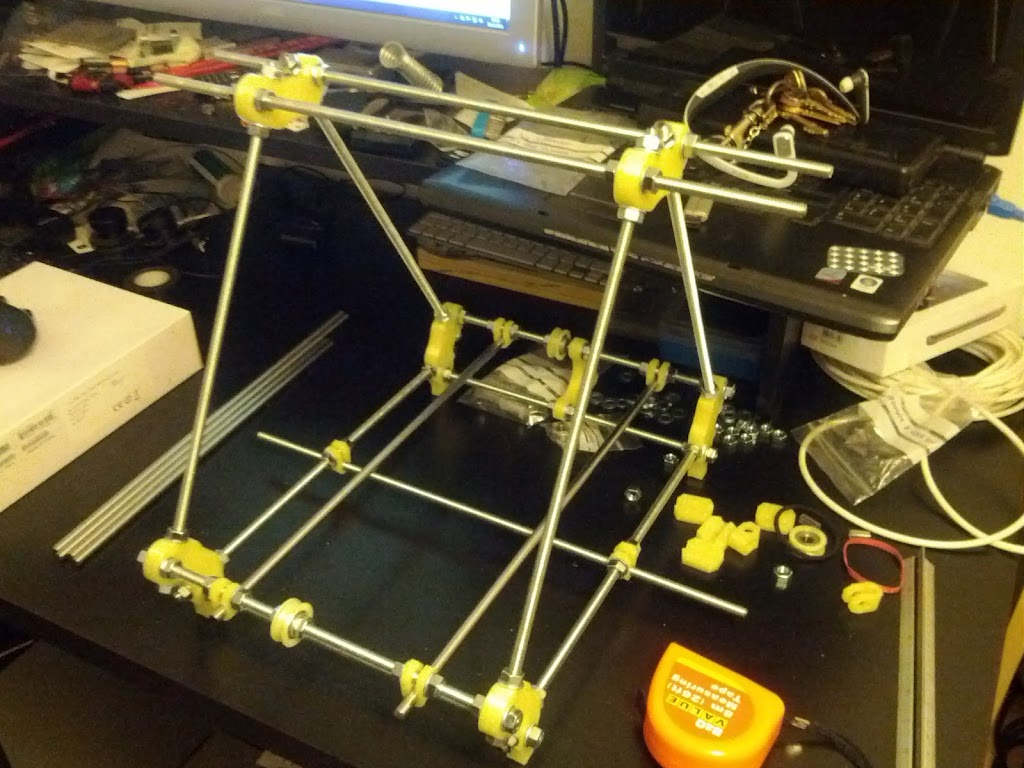 Since the first TVRRUG Meeting a few months ago, it has been all systems go! Our ‘Build Party‘ concept has evolved into a part-works series, where at each TVRRUG meeting we release the next lot of parts to progress in the TVPrusa build. This appears to be a popular approach, and we now have 20 budding RepRap-ers chomping at the bit to get their machines built.

Ever eager not to disappoint, we handed out Issue 1: the frame at last night’s meeting. By the time we got home from the meeting, the first frame was already assembled (well done Curtis!).

The frame is essentially the same as the standard Prusa, so the instructions on the RepRap wiki should suffice. The only differences are the use of bearing guides (printed parts housing a 608 bearing which guide the belts) instead of mudguard washers, the omission of the nut between the bearing guide and y motor bracket, and the frame spacings:

Triangles: nominally 294mm between the plastic on each side, although it is more important that all the sides are the same length than any particular length.

Front/Top/Rear: 250mm between the plastic. This should use pretty much the whole length of the threaded rod on the front and rear (or leave maybe a few mm to spare). This is to fit the wider print plate between the triangles, which makes adjusting the level of the heated bed is possible.

Anyone having trouble or looking for information should check out the TVRRUG website, Google Group or IRC channel #tvrrug on freenode.

Getting all the kits prepared is quite an undertaking, as we have discovered, and we are lucky to have help from other members of TVRRUG. I’ll write more about what work has been involved later, but suffice it to say it took considerably longer than assembling the frame apparently does!