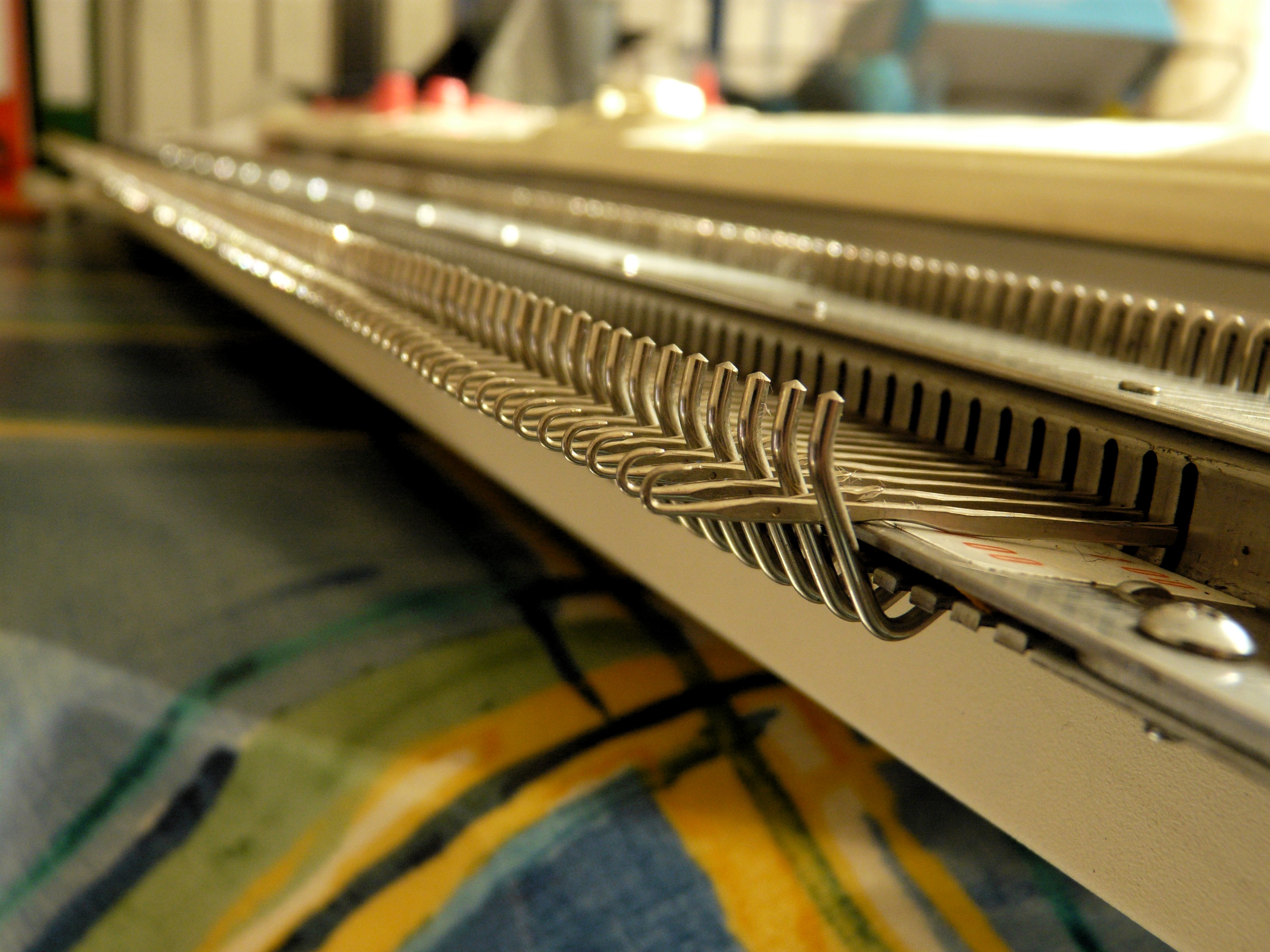 My aunt was given a Toyota KS858 knitting machine and 506 ribber that had been in a friend’s relative’s garage for umpteen years. It came with what seemed to be most of the accessories, but was missing a manual and punchcards. On a visit in the summer I found a copy of the KS858 manual online and we muddled through trying to set it up, neither of us knowing what we were doing. The end result looked like it should work, but we couldn’t get it to knit properly. 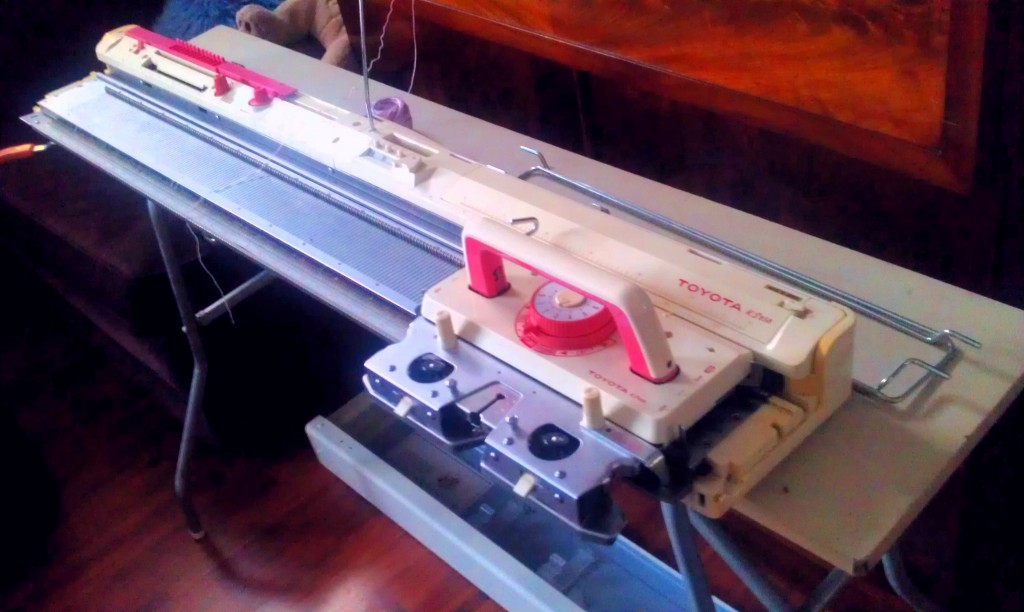 So whilst passing through on our way to TeenTechs South Yorkshire and Humberside Dad and I picked up the knitting machine and accoutrements. Inspired by various knitting machine hacks such as Electro-Knit and Gelsomina as well as machine knitted projects like knitted music videos, Dad and I had in mind to hack some computer control onto the punchcard mechanism. But first to get it working!

I found the service manual on eBay and proceeded to dismantle the machine, partly because it had been sitting unused for so long and also partly to understand how it works a little better. Pretty soon I discovered the first problem – a broken pattern board clip meant the upper needle selector buttons didn’t engage properly. 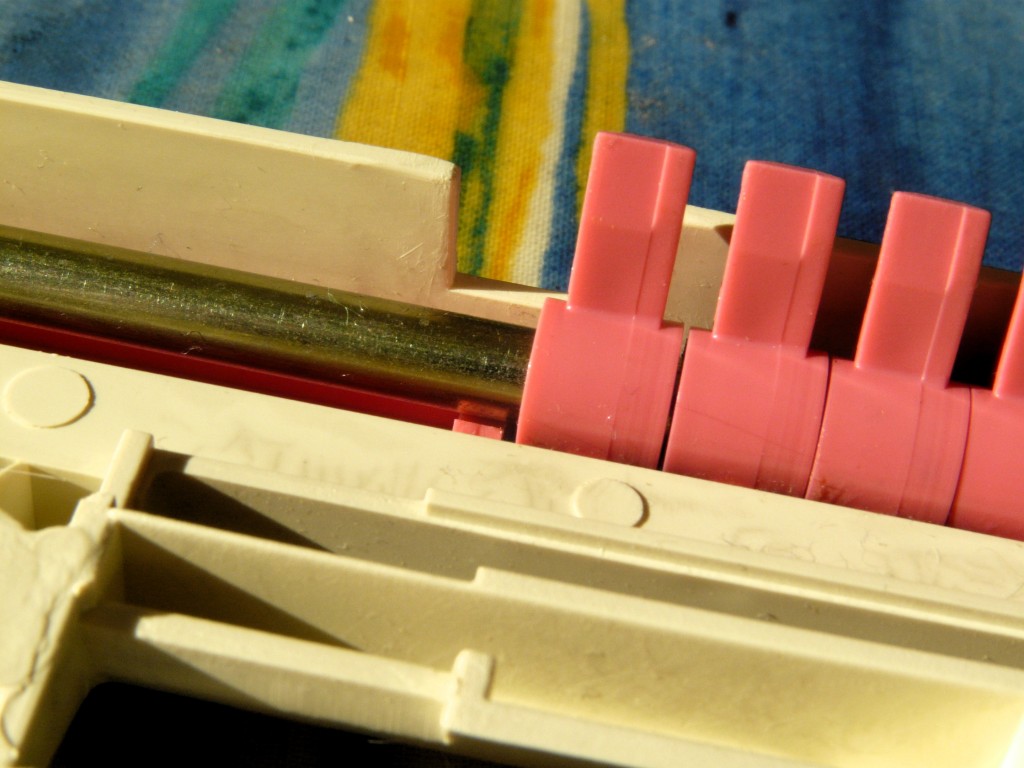 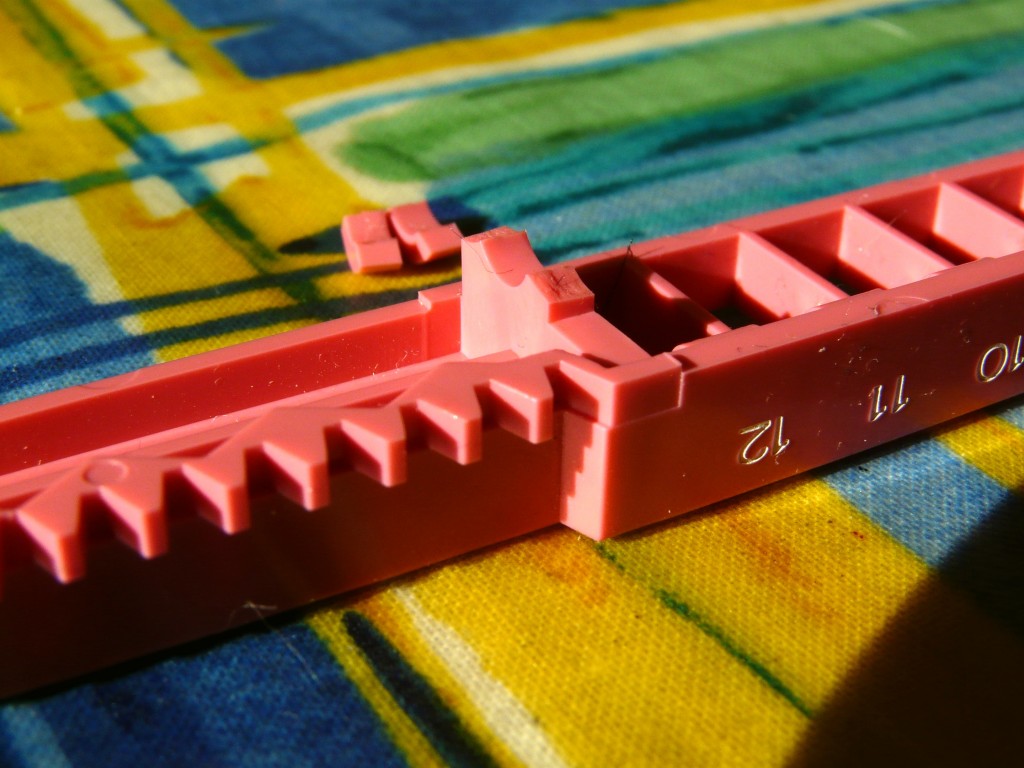 Whilst brainstorming ways to fix or replace the broken part, including 3D printing a fix or trying sugru, Dad came across this gem of a video on how to use superglue and paper to fix hard plastic parts:

I call it ‘superglue mache’ and it seemed worth a try. I cut out pieces of paper to fit the broken part as best I could, followed the video and left it all to dry overnight. 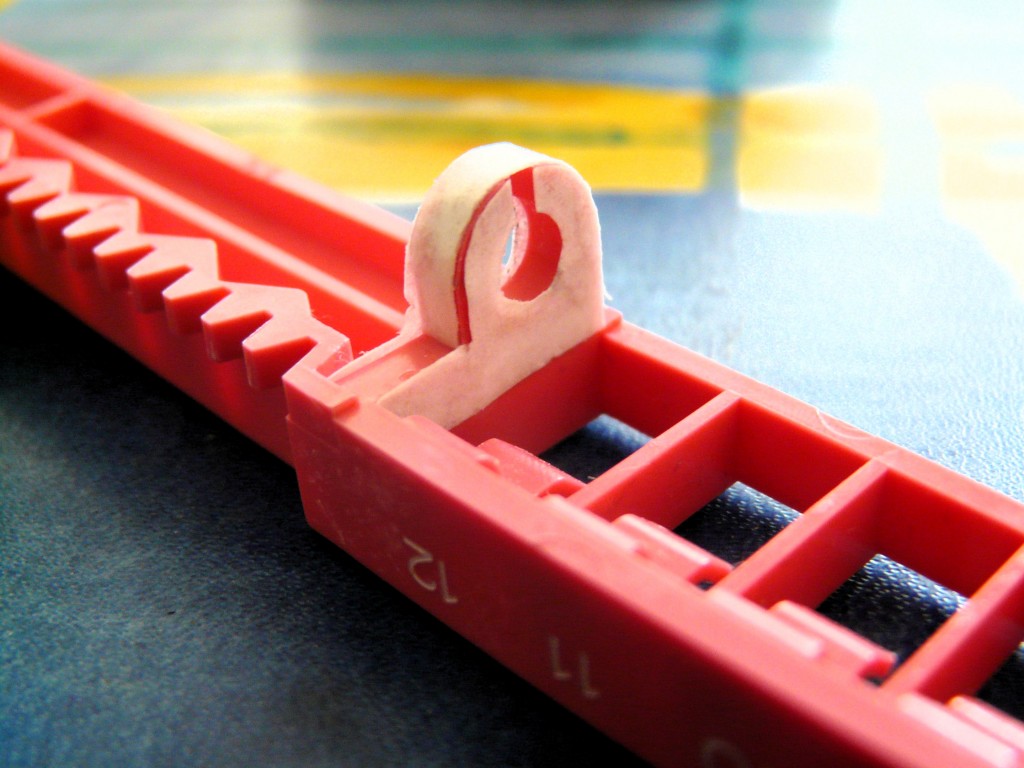 Whilst waiting for the superglue mache to dry, I experimented with the innards of the needle selection mechanism and found the needles didn’t move smoothly into and out of the A position. Most advice I could find on the web suggested checking the needle presser bar sponge as a first port of call for seemingly any knitting machine problems. It took me a while to locate the needle presser bar, but once I had it was obvious the sponge definitely needed replacing – the surface was level with the metal housing with indents at the position of each of the needles. Again eBay came to the rescue with these replacement needle presser bar sponges. There was a fair bit of effort involved to remove the old sponge, scraping it out with a stanley knife and using some WD40  and wire wool to try and remove the adhesive but the replacement kit was easy to do and was well worth it. 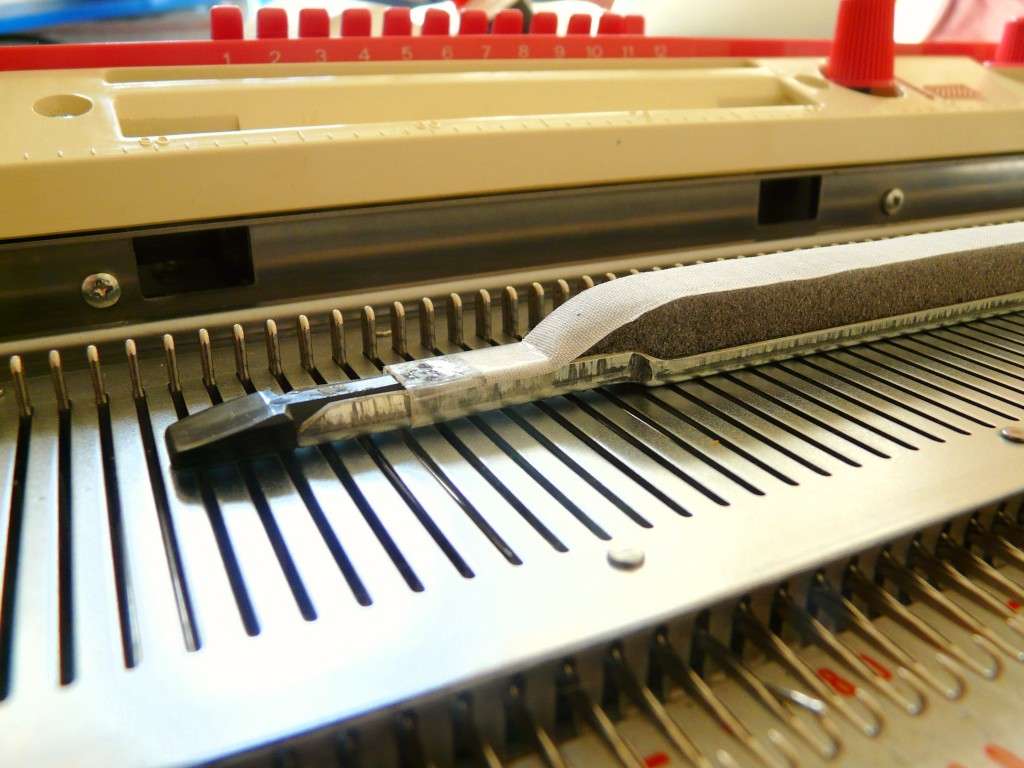 The superglue mache fix worked a treat. Trying to fit the rod through the fixed part caused the piece of paper bridging the two prongs to tear, but with a careful application of another layer of paper and glue over the tear with the bar in place the repair is nice and strong, and the buttons now all give a satisfying click when switched. 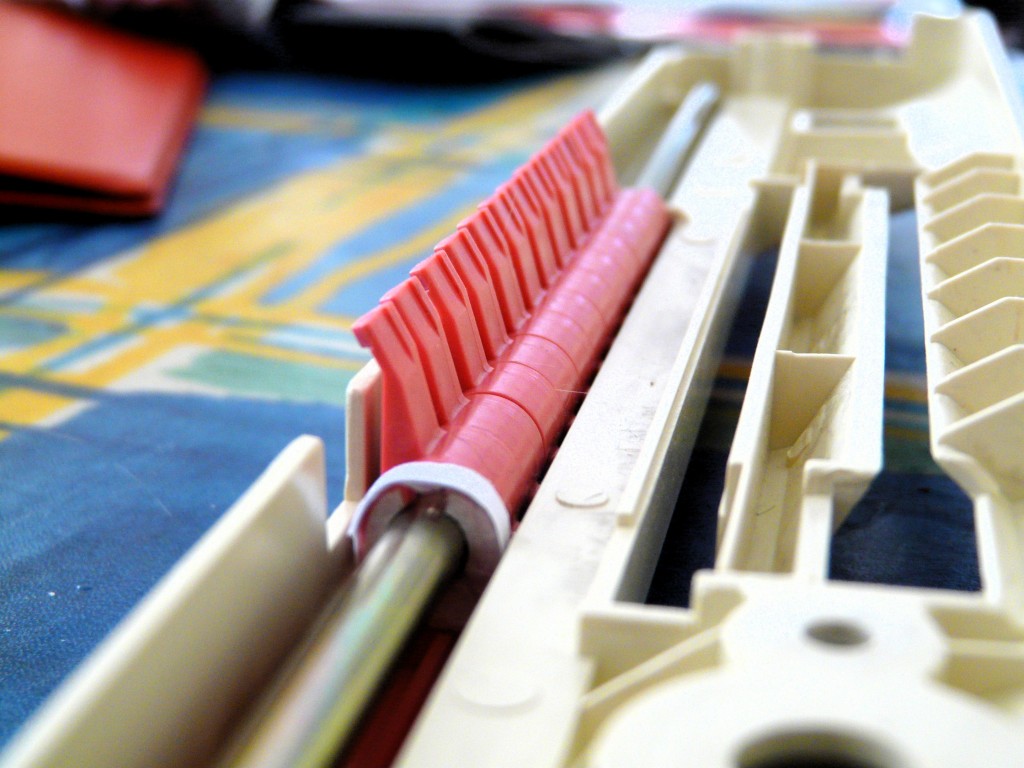 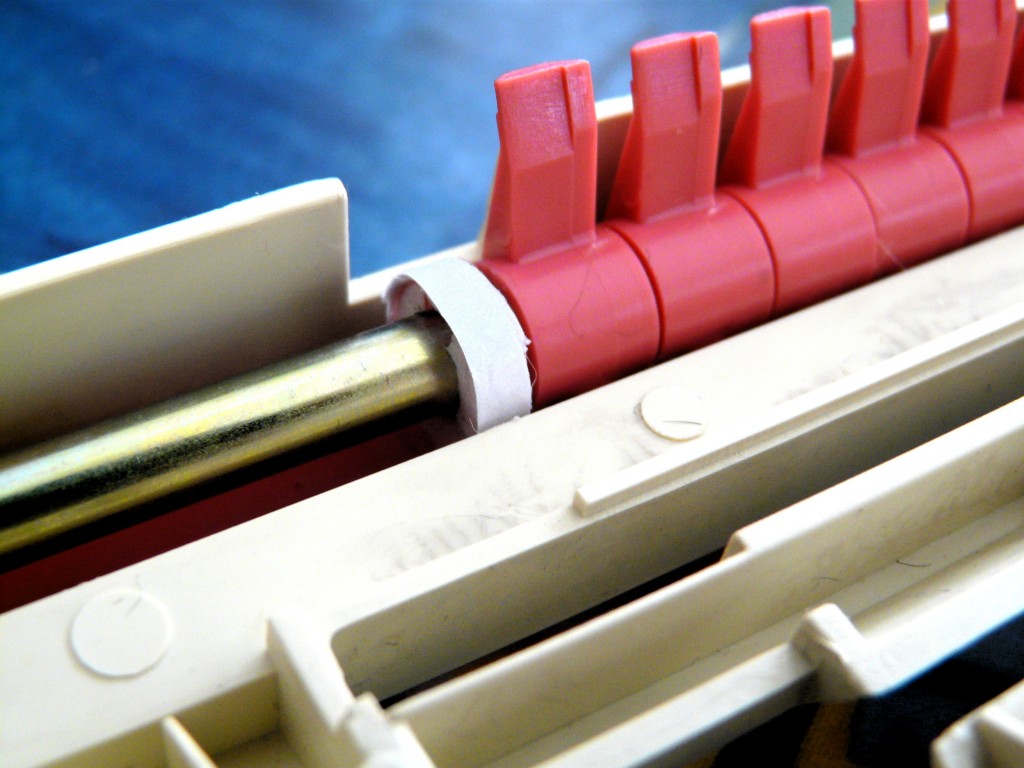 The next immediate problem was that even with all the buttons of the pattern board ‘off’, the 1st needle was being selected. Working through the service manual (very useful to have!), adjustments of the selector pin spring, holder and drive plate positions resolved it.

Now, time to try and knit something…